The Effect Of The Virtual World On Children's Minds

I was searching on social media which I saw this post from someone. I was in shock! The 4 years son  asking from his father that, Papa did you downlead me?!

I think we should care about our children more and more. Parents shouldn't let the children stay in social media and virtual world long time. It's so sad when we see such things!

There is nothing wrong with such questions from children  And children ask a lot of questions according to their curiosity But it is better to confront the children's minds with the realities of life and not allow them to be too much in virtual world, and this is the responsibility of parents.

In some countries like Iran which Islamic government have a power and don't let to talk about such subjects, Parents have a more responsibility to teach and answer to the children questions. 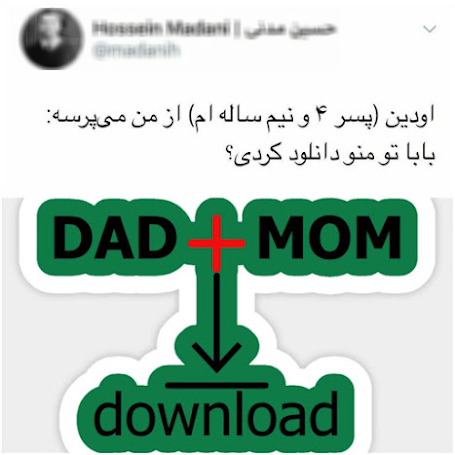 This tweet shows how much virtual world and the internet the digital world have entered the minds of our children and even changed their questions, thoughts and ideas. Due to the widespread influence virtual world in children and youth life, In your opinion, apart of entertainment part of this pace, how to use this space for the civic development children and young people?
Unfortunately, in Iran and specially in schools, because of religious government, children are not provided with the necessary education on some topics.
One of these topics is how children are born!
Some time ago, a video was post in virtual world and the report was about asking from children: Do you know how you were born that children in different ages did not know. More problem was reaction from Islamic government. First of all they deleted the video because in their opinion it was harassment and The reporter arrested also!! Such things can be funny maybe but when we think about it, can be sad!
Email ThisBlogThis!Share to TwitterShare to FacebookShare to Pinterest